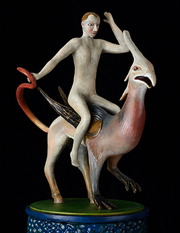 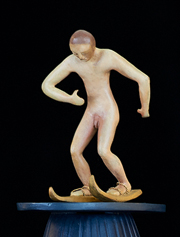 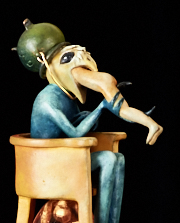 It would be complicated to deal with the mystery of medieval iconography without understanding the sociocultural circumstances of that period and bearing in mind that very few people at that time knew how to read and write, therefore creating a permanent communication problem. However this wasn't such a problem as in this apparently dark medieval world, a thousand year old culture had already created a practical solution via images elaborated from the early civilizations through iconography.
The practical question consisted in giving the images a simple understandable content that could be understood by everyone without effort. The decision to give each icon a defined meaning was a process not just a rule, and whose responsibility was of the political and religious institutions, but also intuitive as in many cases it was a case of recognizing and accepting the concepts which the people applied to certain images. This information, on one hand, was recognized in symbolic meaning because its elaboration had been growing, in many cases, during thousands of years, and the iconic patterns were deeply rooted in popular culture and, so, difficult to refuse or uproot. Finally accepted although moral signs changed, as a lenser evil, from positive to negative with the religious changes.
When Bosch started painting it was in a period of time when this iconographic language got more sophisticated according to the way the period evolved changing cultural contents (people began to read and write) and, within the cultural changes, we have to include religious and moral ones.
Therefore, in dealing with the work of Bosch we cannot conform with remaining suprised and amazed by the unending number of incoherent beings, apparently dream like and at the very least threatening, in spite of being at times simply strange.
In reality the figures of Hieronymus Bosch are all filled with this image culture in which each scene, consists of specific figures with special meanings, nearly always a warning or a description of a sin, a vice or its eschatological consecuences. There is clearly a didatic and moralizing intention in the final work of Bosch, whose symbolic significante has fortunately been recovered, giving way to the sculptural work of Sara Giménez with which she tries to recuperate the "readings" of the work of Bosch.